The San Francisco Bay Area Theatre Critics Circle is saddened to note the passing of Richard Connema, our most senior member. Richard recently passed away at a board-and-care facilty in the East Bay where he had resided following a series of debilitating strokes. He was 96.
Richard was preceded in death a few years earlier by his life partner Eddy Chambers. It would be hard to imagine two more enthusiastic theater fans than Richard and Eddy, who for decades were inseparable figures at Bay Area theater events.
It would likewise be impossible to imagine anyone more gregarious than Richard, who continued his voracious pursuit of theater in the wake of Eddy’s passing. Even after a major stroke made speaking difficult for him, Richard went to the theater with astounding regularity. A prolific critic, he bragged of having seen more than 180 different productions in a single year, certainly a Critics Circle record that will never be broken.
He was also an irrepressible collector of theater memorabilia—friends reported that he had saved fifty years’ worth of playbills and clippings. The apartment he and Eddy shared was a library of San Francisco theater history.
A series of smaller strokes put an end to his theater-going and reviewing career. To assist him through those challenging times, friends arranged for him to receive long-overdue Veteran's benefits. Richard served in the US Army towards the close of WWII; one of his favorite (and possibly apocryphal) anecdotes of that era was that he was in the audience for a Carnegie Hall performance by the delusional singer and socialite Florence Foster Jenkins, memorialized in Stephen Temperley’s two-character play “Souvenir” and the 2016 film starring Meryl Streep.
Richard had a lengthy Hollywood career (including a stint as Ginger Rogers’s driver and personal assistant) as a still photographer, starting with B-movie mecca Republic Pictures and the Orson Welles production of Macbeth before moving to Warner Bros studio where he was a staff photographer for 45 years. He proudly wore his WB company jacket almost everywhere he went. He was an enormous presence in the Bay Area theater scene, always happy to see his colleagues in the lobby, always happy to discuss theater at any length.
For many years he worked closely with former SFBATCC President Tom Kelly. Together they spent days engaged in hand-tabulating nomination and awards ballots for the Circle’s annual “Excellence in Theatre” gala. He might have grumbled a bit about the workload but he always tackled it with characteristic glee and enthusiasm. Richard was also a long-time contributor to the national theater site, www.TalkinBroadway.com.
Richard Connema was one of kind, beloved by all who knew him. He will be greatly missed by the entire Circle, and by the much wider circle of theater folk who welcomed him to their productions week after week for decades.
Information about a memorial service will be posted when available.

* Click HERE for information about our "Go See!" selections. * 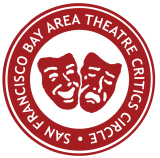 The SFBATCC is a private 501(c)(6) non-profit organization dedicated to promoting and serving theatres of all types and sizes in the greater region by recognizing excellence and outstanding achievement in the field. Active since 1976, the Circle consists of reviewers covering theatre in all nine Bay Area counties, across various media, who are voted into membership by existing members based on the quality and consistency of their reviews. The Circle hosts an annual awards ceremony each Spring to celebrate superior work in the previous year.

To quote past President Jerry Friedman: The purpose of the Circle was and still is to promote the growth and recognition of theatre in the Bay Area; to promote a continuing fellowship among its members; to advance the professionalism of theatre criticism; to encourage research, discussion and study of the problems and techniques of theatre; to strengthen and maintain the highest standards of service and ethical conduct by all members; to exchange ideas and experiences that may enhance and improve the professional knowledge of the membership; to solicit gifts and grants to further the organization's goals; and to reward excellence in all phases of theatrical production through the Circle's annual awards.

Browse our website to learn more about the Circle, its current members, links to their reviews, recommendations on what to "Go See!", and past events. The Photo Gallery features pictures from previous awards ceremonies.